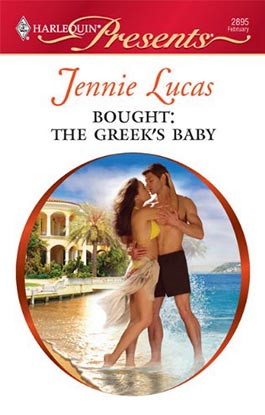 From poverty to power —this Greek tycoon claims his baby!

Three months later and Eve has lost her innocence — and her memory!

But she has aroused Talos's desire and his anger — she has betrayed him. So what better way to punish the woman who nearly ruined him than marry — and destroy — her...? Only she's now carrying his love-child...

"Once this entertaining tale begins, Lucas does a terrific job of keeping the reader off-balance right to the end."

"As a reader of romance this particular romance had so many twists and turns, was very intense, and full of revenge it kept me up most of the night. My heart was pounding, my emotions were all over the place and I so loved this story and wished for a happy ending and I got one! Forgiveness, understanding and what’s important LOVE and that's what Bought: The Greek's Baby was all about... a fabulous love story with an emotional happy ending!"

"Bought: The Greek's Baby is a complex love story filled with betrayals, misunderstandings and secrets. Award winning author Jennie Lucas has created a powerful alpha hero and strong loving heroine to unravel this complexity and find a passionate HEA among warm exotic locals that will leave the reader blissfully sighing."

Talos was still reeling. He would not trust her to take care of a house plant, much less a child. Eve was not even slightly maternal. She wouldn't love a baby. She was the least loving person Talos had ever met.

Slowly, he opened his eyes.

He hadn't even known about the baby an hour ago, but now he was absolutely sure of one thing.

He had to protect his child.

"So I don't live in England," he heard Eve say. Steeling his expression, he turned to face her. Her face looked bewildered, almost sad as she added hesitantly, "I don't have a home?"

Home. Against his will, he had the sudden image of Eve in his bedroom at Mithridos, spread across his large bed, with the twisting curtains from the sea breeze coming off the sparkling Aegean. No! That had never happened, and it never would.

"You live in hotels," he answered coldly. "I told you. You travel constantly."

"So how do I hold down a job?" she said in disbelief.

"You don't. You spend your days shopping and attending parties around the world. You're an heiress. A famous beauty."

Eve gaped at him. "You're joking."

"No." He left it at that. He could hardly explain how she and her dissolute friends traveled in packs like parasites, sucking a luxury hotel dry before moving on to the next. If he told her that, she might hear the scorn in his voice and question the true nature of his feelings.

Malakas, how was it possible that he'd been so caught by her? What madness had possessed him to be so enslaved?

How could he make sure that his child never was neglected, hurt or abandoned by her after she regained her memory?

A new thought suddenly occurred to him.

A slow smile curved his lips as he built his new plan. He could take everything from her, including their baby. And she would never see it coming.

"So I was here for my stepfather's funeral," she said softly. "But I'm not British."

"Your mother was, I believe. You both returned to England some years ago."

She brightened. "My mother!"

"Dead," he informed her brutally.

She froze, her face crumpling. Watching the swift movement of scenery on the outskirts of London through the window behind her, he remembered her mother's death was fresh news to her. And that he was supposed to be in love with her. He had to make her believe that if he wanted his plan to succeed.

Pulling her into his arms, he held her close against his chest, kissing the top of her head. Her hair, messy and unwashed, still managed to smell like vanilla and sugar, the scents he associated with her. The scent that immediately made his body go hard and taut with longing, with the immediate temptation of a long-desired vice.

Thee mou. Why couldn't he stop wanting her? After everything she'd done, the way she'd nearly ruined him, how was it possible that his body still longed for her like a dying man thirsting for water? Was he really such a suicidal fool? Did he have no honor, no pride?

He had pride, he thought, clenching his jaw. It was her. Even now, acting so sweetly demure, her innocence attracted him like a flame. He remembered the fire of passion inside her. And how he was the only man who'd ever tasted it.

He felt himself tighten.

Stop! He ordered himself. He wouldn't think about her in bed. He wouldn't want her. He did have some control over his own body, damn it!

Her fingers clenched against his sleeve, her face pressing against his crisply tailored shirt.

"So I have no one." Eve's voice was small, almost a whisper. "No parents. No brothers or sisters. No one."

He looked down at her, tipping her chin upwards so he could see the tears sparkling in her beautiful violet-blue eyes. "You have me."

She swallowed, searching his face as if trying to read the emotion behind his expression. He schooled his features into concern and admiration and the closest attempt at love he could manage, never having actually felt it.

A sigh came from her lips as she exhaled. A soft smile traced her lips. "And our baby."

It was no different, he thought sardonically, than she'd once done to him. He would lull her into believing she could trust him. Make her willingly marry him.

The instant their marriage was final, he would make it his life's goal to make her remember the truth. He would be with her when she finally remembered. He would see her face as it fell.

And he would crush her. The thought of revenge made his heart glad.

Not revenge, he told himself. Justice.

Leaning forward, he held her closer in the back seat of the Rolls-Royce.

"Eve." He cupped her face in his large hands. "I want you to marry me."

While I was dreaming up the plot for Bought: The Greek’s Baby, I was flipping through pages of a fashion magazine one day when a Mont Blanc ad caught my eye. 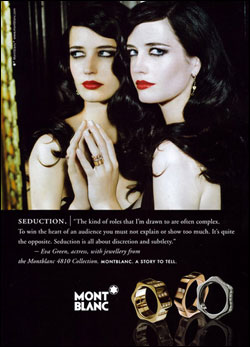 Of course I immediately recognized Eva Green, the heroine from the Bond movie Casino Royale. I adored that movie – so completely sexy. When Daniel Craig holds Eva Green in the shower so protectively after she's just seen a man get killed, I nearly wept. (Although the end of that movie wasn’t nearly so terrific… but still, if you haven't seen this movie yet you should stop reading this and go see it right now!)

I couldn't stop looking at this ad. I ripped it out of the magazine and put it next to my computer on my desk. Maybe it's the duality of this beautiful woman in two images. The real woman and her reflection.

She's both glaring at you angrily – and looking away sadly.

It was a huge inspiration for my character of Eve Craig in Bought: The Greek’s Baby. My heroine's first name was inspired both by the actress, and also by original Eve, who was so innocent and yet so guilty at once.

My heroine's surname, on the other hand, was something I randomly picked – I thought. Until, re-watching Casino Royale a few weeks later, it suddenly occurred to me where my subconscious had picked up the last name as sexy, brutish, ruthless Daniel Craig filled the screen. I mean, duh. I can be really slow sometimes.

This heroine is different from any I've ever done before. She's innocent. But, unlike the others, she's also guilty.

The estate of Eve's stepfather, which she inherits upon his death, was inspired by Hughenden Manor in Buckinghamshire.

The luxurious hotel in Venice, where Talos whisks Eve to try to lure her into marriage, was inspired by the famous Hotel Danieli, which appeared so prominently in the '90s romantic movie Only You. 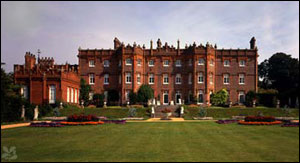 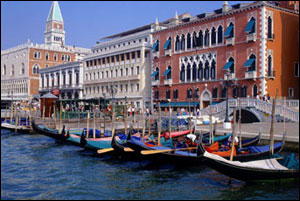 The restaurant in Venice where they have their romantic dinner overlooking the canal was inspired by the Grand Canal Restaurant in the Hotel Monaco.

Check out the view: 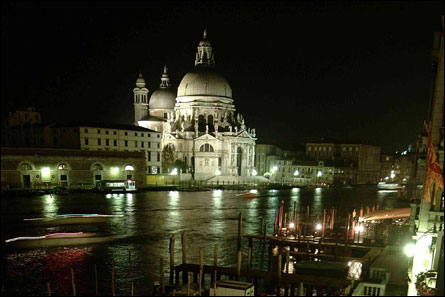 A mystery story - A clean slate

Who wouldn't want to forget some of the stupid choices of the past? I know I wish I could at times.

Eve wakes up from a car accident to discover she's pregnant with a child she doesn't remember conceiving. The father of her baby, a handsome Greek billionaire whom she can't even remember, is determined to convince her to marry him!

It's a dream come true for Eve. A fresh start.

But is it? Everyone has a different idea of what kind of girl she is, and Eve is afraid of what the truth might be. Her past is a mystery she has to solve, with or without Talos's help. And then, something happens between them that changes everything. Love is the ultimate mystery, isn't it?

In Venice, Talos unexpectedly runs into an old friend, Roark Navarre. Roark and his wife Lia insist on creating the perfect fairy-tale wedding for Talos and Eve in the Navarres' castle in Tuscany.

If you want to see how Roark and Lia first fell in love – their forbidden, explosive passion in the secret garden of the medieval Italian castle – you can read their story in The Innocent's Dark Seduction.